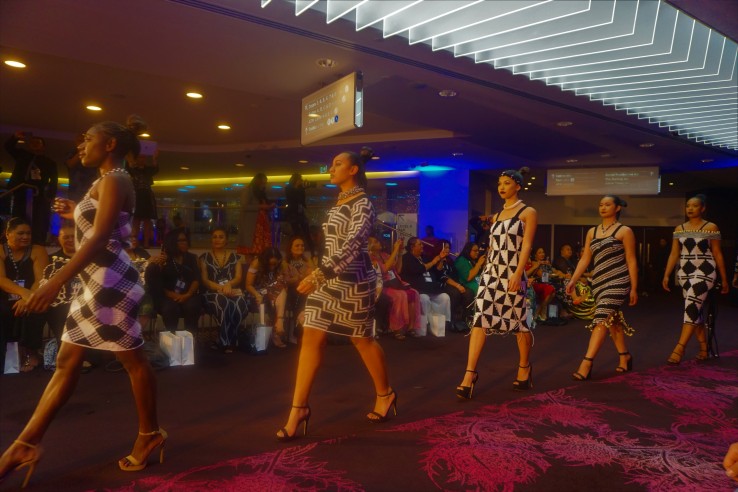 “Witness the Movement,” is the tagline to the Pacific International Runaway. Those compelling yet straightforward three words encapsulate the importance of diversity, in the name of fashion. On the 21st October 2017, the movement has indeed sprung up again, bigger than ever, as it was held at the prestigious venue, the Star, Sydney. Amongst the many attendees that came to the event were notable Pacific Islander VIPs which include; Selena Short, CEO of Crunch Fitness, Caleb Jarvis of Trade Commissioner for Pacific Trade InvestAus and Her Excellency Hinauri Petana (High Commissioner of Samoa to Australia.), etc.

PIR had its humble beginnings in 2015 by the esteemed fashion designer, Failepou Peni who is known for her label, Grace on Lepou and Lepou.  The labels encompass Pacific Islander-inspired clothing lines of dresses and garment that were best suited for plus-sized women. Her label mission was to be embrace voluptuous women like herself and bring forth a movement that empowers all women with different body types and cultural backgrounds. On the same note, PIR has taken it further to promote Pacific Islander trade and export and is a platform for upcoming and established Pacific Islander designers to get industry recognition across the world.

As people started reeling into the immaculate doors of the Star, a warm and welcoming atmosphere unfolded amongst the mellifluous murmurs that filled the room. When the clock struck 7, PIR opened up with a prayer which was preached by Reverend Roy Saipa and then transitions into a breakout performance by the musical trio, the Papaliis singing, “Every Praise.” There was a raw soul in their voices which was hard to replicate and left the audience in awe. MCs Maddison Clare Sloane and Junior Tia-Kilifi, with their charismatic charm and positive energy, welcomed everyone and anticipate for the fantastic fashion show yet to come.

The audiences were greeted by the High Commissioner of Samoa to Australia, Hinauri Petana opened up her speech with “Talofa lava. Thalo le soifue laukki,” which briefly translates into “I’m happy that you are in good form.” Her Excellency addressed that an event such as PIR opened doors in promoting Pacific Islander trade, especially in the fashion industry. It is a stepping stone to creating more opportunities for young designers to gain industry recognition. She ended her speech with an important note for the audience to enjoy the beautiful fashion which will shortly commence after.

There is a total of nineteen designers who are either established or emerging, including, Island TKM, Florence Jaukae Kamel, Karen Abdul, Dane Mulinu’u Fabricious, etc. For the next three hours, the runaway was graced with a plethora of beautiful garments which encapsulated the fusion of tradition and modern. Each fashion label was routinely showcased for five minutes at the time by an incredibly diverse model casting—mesmerisingly beautiful female and male models of different shades and sizes. The diversity was somewhat refreshing to see as it is one of these anomalies that one might experience once in the fashion shows. Each model confidently bee-lined their way to the blinding camera lights of the paparazzi, serving the designers’ creations with immense justice while posing, and then they U-turned gracefully backstage.

There was an onslaught of exceptionally bold colour choices, intricate raffle detailing on evening gowns which mesmerised the audience’s attention. A noticeable trend throughout the show was there was a lot of geometrical patterns, tropical earth tones paired with floral fabrics and two-toned crocheted wearables, which were obviously proved to be very fashionable. A true testament to the skillset of the designers!

The fashion extraordinaire and director of PIR herself, Fai Lepou presented herself and gave everyone the final word, “When you guys come and support us it makes a difference to us. It let us know that we can continue to come forward and continue and break the European market. Two of our designers just came back from New York and met a star, Calvin Klein. That’s huge for us. Not just taking our brand but the rest of our culture.”

As the magic of PIR continues to linger towards the end of the night, it is without a doubt an event that sets a precedent for cultural diversity. Star Central Magazine congratulates Fai Lepou and her dream team for putting together a phenomenal event and hopes next year would be just as monumental!

An aspiring journalist who has a flair for story-telling. I would describe myself as a fleeting entity who struggling to survive in chaotically organised mess . ( Yeah, I'm pretty pretentious.) View all posts by Jenny